The Western Wall is the most visited site and all that remains of the supporting walls of the Temple Mount. The creation of the world began from the Foundation Stone which is found on top of the mountain.  This is where mankind was created, where Abraham bound his son Isaac for sacrifice, where Jacob’s dream with the ladder and the angels going up and down, and the place of the First and Second Temples.

Despite the destruction of the second Temple that took place in the year 70 CE, all four walls of The Temple Mount support walls remained standing.
TO BOOK A TOUR OF THE WESTERN WALL TUNNELS THROUGH THE WESTERN WALL HERITAGE FOUNDATION
CLICK HERE 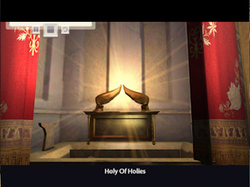 ﻿Experience a Glimpse of the Holiest of Holies in Jerusalem!﻿
click on picture to the right